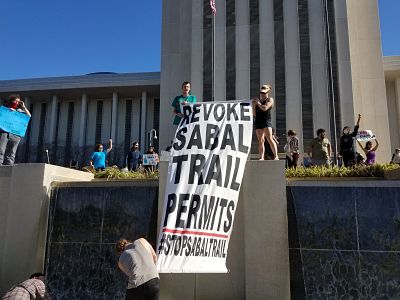 Water Protectors from the Sacred Water Camp gathered at the Florida State Capitol, in Tallahassee, to raise awareness for the fight against the Sabal Trail Pipeline at a “Die in or Die-out” event on January 12, 2017. They went to make a statement and to ask state lawmakers and Governor Rick Scott to take action to stop the pipeline.

While they were few in number, compared to the thousands who gathered at Standing Rock to fight the Dakota Access Pipeline in North Dakota, their spirits where high as they sought to bring attention to their own pipeline battle.

Those gathered noted how “Standing Rock has shown us what people can do when we stand together.” If enough people show up in numbers to offer support, as they did with Standing Rock, Florida Water Protectors and their supporters are hopeful that the fight to stop the construction of the Sabal Trail Pipeline can be won.

They are opposing the Sabal Trail Pipeline to protect water for future generations against what is viewed as the greed of the fossil fuel industry and, specifically, Spectra Energy—the corporation building the pipeline. According to sabalresistance.org:

This project represents a multi-decade long investment for the fossil fuel industry. That means more domestic production, more transport, more destruction, more leaks. The pipeline will cross the most exposed part of the Floridan Aquifer, which is home to hundreds of springs, rivers, lakes and streams harming 1,958 wetland systems. This aquifer also underlies an area of ~100,000 square miles and provides drinking water to over 10 million people in cities such as Savanah, Brunswick, Orlando, Jacksonville, and Tallahassee.

For locals concerned about their drinking water, they hope the pipeline will not be allowed to be built under the Floridan Aquifer, one of the largest and most productive aquifers in the world.

As of now, these Water Protectors face the same “media blackout” strategy that is being used by the corporate media to keep the general public in the dark about anti-pipeline and other protest movements.

Standing Rock appears to have been able to partially overcome their own media blackout by employing tactics that reflect those used to bring attention to the Bernie Sanders campaign when mainstream media outlets decided it was not worthy of coverage.

By having supporters of given causes share multiple posts every day, social media has served as a powerful tool to combat media blackouts and raise awareness for major national and global issues that the media refuses to cover.

For anyone who hopes that Standing Rock, and the ongoing battles against pipelines across the nation, are the beginning of a movement to stop all pipelines in the future, now is not only the time to act but to share posts to help raise awareness and build support for the Water Protector Movement.

Building support and raising awareness for struggles like the fight against the Sabal Trail Pipeline can increase pressure on our politicians and the corporate sector to transition our nation away from fossil fuels thus protecting our water and reducing carbon emissions.

Sharing stories and updates from Water Protector groups should be done frequently for those of us hoping to begin our nation’s meaningful transition away from fossil fuels and to protect our water for our children.

You can begin sharing and raising awareness for this struggle now by sharing information about an upcoming event in Florida taking place this weekend.

Florida Water Protectors are planning another action this Saturday, January 14, 2016, being called a “Massive Civil Disobedience” designed to be a “mass sit-in to stop the Sabal Trail fracked gas pipeline construction from drilling under the Suwannee River near Live Oak, FL.”

At 9am there will be a brief introduction and training for participants in the march and civil disobedience again at Suwannee Springs, which is on public land owned by the Water Management District: 3243 91st Drive, Live Oak, FL

At 11am, we will gather at the Suwannee River State Park parking lot. Please plan to carpool as there is a $5 fee per car to park here. People will rally here till noon, then shuttle/caravan to a nearby stop to begin march. We will march on the drill site at 1pm sharp.

PLEASE NOTE: The march is a legal First Amendment protected activity. The civil disobedience will occur in a distinct area so as to minimize risk to those not participating in it.

For more on the fight against the Sabal Pipeline:

Published by Jason A. White

Jason A. White, 37, is a father of three from Mansfield, PA. He is a carpenter and an activist with a BA with Majors in Philosophy and Political Science and a Minor in Public Relations. He worked at Standing Rock, ND, to help the Native Americans and their supporters, collectively calling themselves 'Water Protectors,' to prepare for winter and to participate in, document, and raise awareness for the movement against the North Dakota Access Pipeline. View all posts by Jason A. White